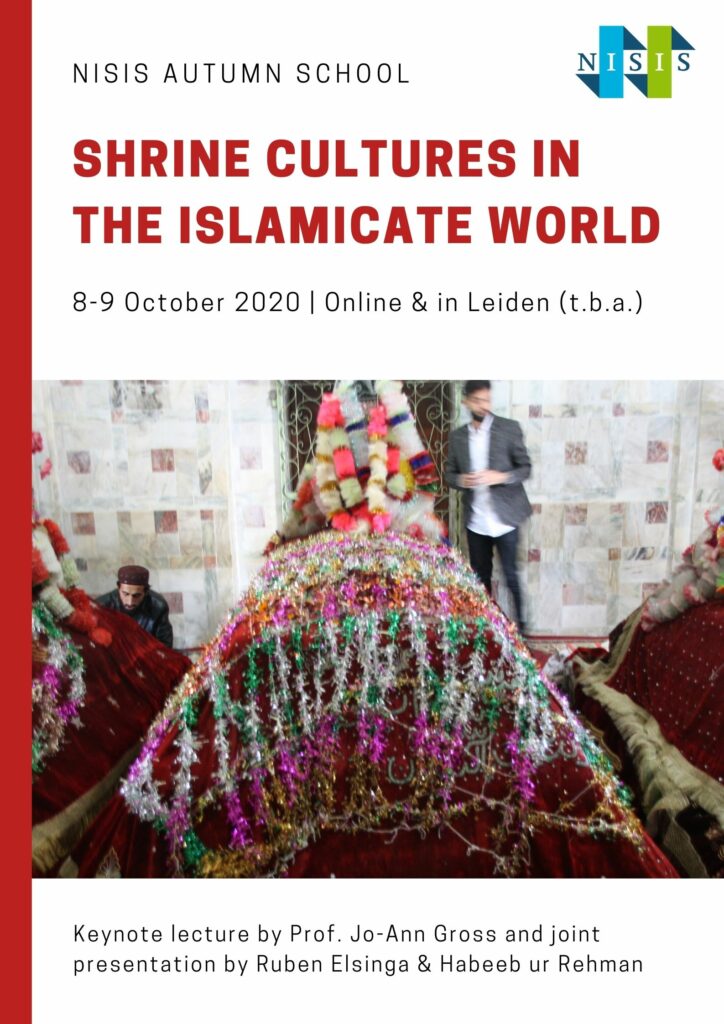 On the 8th and 9th of October 2020, the tenth NISIS Autumn School will take place. Due to Covid-19, this jubilee edition about “Shrine Cultures in the Islamicate World” will be different from all previous years, but no less inspiring! Thanks to Prof. Gabrielle van den Berg (Leiden University) and Prof. Dick Douwes (Erasmus University Rotterdam), who are hosting this year’s Autumn School, we offer you a cutting-edge lecture by Prof. Jo-Ann Gross (The College of New Jersey) and a joint presentation from both an emic and etic perspective by Pir Habeeb ur Rehman (Aga Khan University London) and NISIS junior member Ruben Elsinga (Erasmus University Rotterdam). The afternoon will be closed with a discussion panel with leading experts in the field. Please make sure to register before September 25, 2020 if you’d like to participate. If you register for the Autumn School, you’re not automatically enrolled in the Chapter Clinic on the 9th of October. If you wish to participate in the clinic as well, please register here.

“Shrine Cultures in the Islamicate World”

Across the Islamic world, Sufi shrines form focal points in the landscape, both in urban and in rural areas. Many shrines are bustling places of pilgrimage with a strong emotive power and a profound commemorative role. Shrines often represent religious or moral values and relate in different ways to public and personal memories, which are preserved and produced in a wide array of materials and ritual practices.  As such, shrines inform directly or indirectly a great variety of academic research into Muslim societies. 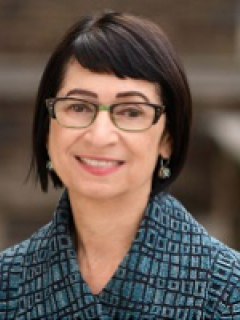 In this Autumn School, Professor Jo-Ann Gross (The College of New Jersey) will give a keynote lecture (see abstract below) in which she will explore the multi-dimensional development of traditions regarding Sufi saints, in connection to the transformation of saints’ burial places (real or imagined) into shrines. She will introduce and discuss the term ‘shrinescape’, to refer to an acknowledged, sacralized landscape comprising the natural and built environment associated with a holy figure. In her lecture, she will employ a case study of Khoja Isḥāq Khuttalānī (d. 826/1423), the disciple of the renowned Kubrawī Sufi shaykh, Mīr Sayyid ʿAlī Hamadānī, and the pīr of Muḥammad Nūrbakhsh (d. 1392/1464), founder of the Nūrbakhshiyya. Jo-Ann Gross did extensive fieldwork in Central Asia and published widely on the topic of Sufi shaykhs and shrine tradition in past and present Central Asian society. 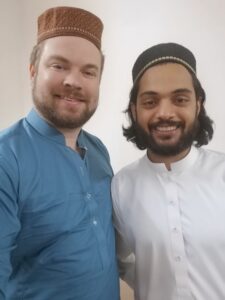 The second presentation will be by Habeeb ur Rehman (Aga Khan University London) and Ruben Elsinga (Erasmus University Rotterdam), who will talk about life at the Rehmania darbar, a large shrine in the city of Haripur in Pakistan, where Habeeb became the pir recently. Ruben has been following him in this journey and his pilgrimage to major shrines in the Punjab. They will touch on different themes such as the process of leadership succession, the life of a pir before and after succession, the politics around the institute, as well as spirituality and civility. Around the Punjabi shrines pilgrimage material, they will reflect on the personal significance of the pilgrimage before, during and after for Habeeb, and on the life and dynamics at these shrines.

My lecture will explore the literary and physical dimensions of the interrelated processes of the memorialization of Sufi figures, specifically, how textual and oral traditions about Sufi saints overlap and intersect and are formed and re-formed over time, and the associated transformation of saints’ burial places (real or imagined) into shrines, forming shrinescapes that incorporate a combination of Islamic and mythic motifs. I use the term ‘shrinescape’ to refer an acknowledged, sacralized landscape comprising the natural and built environment associated with a holy figure. To explore these questions, I employ a case study of Khoja Isḥāq Khuttalānī (d. 826/1423), the disciple of the renowned Kubravī Sufi shaykh, Mīr Sayyid ʿAlī Hamadānī, and the pīr of Muḥammad Nūrbakhsh (d. 1392/1464), founder of the Nūrbakhshiya. Khwāja Isḥāq is perhaps best known for his recognition of his disciple Nurbakhsh’s messianic claim in 1423 and his proclamation of Nurbakhsh as mahdī, which led both to a split within the Kubraviya, and to Khwāja Isḥāq’s martyrdom, as he was killed by the army of the Timurid ruler, Shāh Rukh.

There are multiple narrative traditions about Khwāja Isḥāq’s life and death, although the most well-known and widely accepted of them is Karbalālī’s Rawżāt al-jinān va jannt al-janān, written in the late 16th century, which locates his burial place in Khuttalān, where his officially acknowledged shrine exists today. A second source, a 19th century pilgrimage guide to Samarqand, Abū Tāhir Khwāja Samarqandī’s Samariyya, written in 1251/1835/6, describes “Haẓrat-i Khwāja Isḥaq” as having been buried in a cave in the Fan Mountains in today’s Soghd region. A third previously unstudied source, Ruznomai Safari Iskandarkul by Abdurahmon Mustajir, also known as The Diary of the Iskandarkul Expedition, records a Russian scientific expedition in 1870, ostensibly with military goals. The diary is written in Samarqandi Persian and was published in 1970 in Tajiki (Cyrillic script). The entry of 15 June 1870 records a visit to Makhshevat to a cave (again in the Fan Mountains) in which “Hazrat-i Khoja Isḥāq Valī’s mummified skeleton remains buried and is visible from the waist up. A fourth unstudied, unpublished local hagiographical source is the Manaqib-i Sayyid Ishāq Khulābādī, which adds yet another hagiographical dimension, since it is an Islamization narrative of holy war that describes the martyrdom of “Sayyid Isḥāq” and his burial by his murids in the mountain cave shrine in Makhshevat. Finally, there is a body of Soviet and post-Soviet secondary literature from Tajikistan, in the form of published pamphlets, book chapters, and articles, which address Khwāja Isḥāq Khuttalānī’s biography, hagiographical traditions, and shrines. This study accepts, rather than calls into question, the multiplicity of textual genres and narrative traditions of Khwāja Isḥāq Khuttalānī, investigates the linkages between the natural and built environment of his shrines and the texts that seek to explain them, and offers historical perspectives on issues of interpretation with regard to the study of sacred landscapes in Central Asia and the wider Islamicate world.