On January 28 2021 the third session of the NISIS Masterclass “The Past and Future of Islamic Studies” will be hosted by the NISIS Junior Council. The Masterclass will take place via Zoom, and will start at 9.00 AM (local time in Amsterdam). This time, we are ploughing through a new and emerging field in and around Islamic Studies: Environmental Studies. 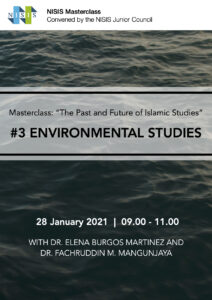 During this session we zoom in on a number of scholars who have dedicated their work to ecological and urban environments. Since the 21st century, scholars dedicate case studies to learn about climate change, natural disasters, land use, bioindustry, animals, and environmental resources as part of a global economy. Some study the role of ecopolitics in medieval history, whereas others look at the way how Muslims adapt their everyday lives to fulfill their hopes and deal with the interdependent and stratified realities that affect them. In the lectures we take this pressing theme through the lense of history and anthropology to learn about the present day environment and the historical trajectories that shape socio-ecological dynamics.

As per usual, we have invited two speakers to open up the discussions and guide us through this emerging research agenda: Dr. Elena Burgos Martinez (LIAS, Leiden University) and Dr. Fachruddin M. Mangunjaya (Universitas Nasional). Please find the abstracts of their lectures below.

If you have not yet registered for the Masterclass Series, please do so here. In order to receive EC junior members have to audit and actively participate in at least 3 out of 4 sessions. Please see the course description here.

Situating religion and environmental knowledge as opposing categories, almost mutually exclusive is not tenable and it is a paradigm that does not operate in the multi-cultural, multi-religious and multi-lingual islands of North Sulawesi (Indonesia), amongst many other contexts. Islamic history and philosophy, from Al-Andalus to the Pacific, show the prominence of water and our relation to it for stablishing relations, advancing knowledge and power. Thus, this masterclass goes beyond standardised forms of environmentalism that are constructed as supra-national, rational, and modern to coherently explore island environmental rationality in Eastern Indonesia. Much of today’s environmental theory and praxis tends to focus on the paradigms of notions of bourgeois environmentalism (often terracentric, dismissive of local agency and based on power imbalances). This, unfortunately, offers very little space to register the diversity of environmental ontologies in the world. At the same time, environmental policy also struggles to diversify leading to ineffectively standardised policymaking. Together, we will critically visit dream-accounts from a variety of people and hear what water has to say about environmental degradation and health. Dreaming of (and with) water can represent particular ways of ecological embodiment which are paramount for understanding maritime and island ecologies.  Dreams are ever-shifting spaces for dialogue and negotiation, where individual and collective freedoms are stretched as they travel the world of the (un) conscious: a world where other inhabitants of islands and sea are able to engage in environmental dialectics. From the Imam to those who collect drinking water from the well and the well itself, this is a story of collective individualism and everyday life within island Islam. Sources presented will include vignettes from ethnographic research conducted amongst Bajo communities of Eastern Indonesia. These sketches will further situate dreaming and water as not only mediums but also as environmental messages.

This paper discusses activities undertaken in our attempt to develop environmental awareness and conservation through Islamic teachings in Indonesia. We began by cooperating with pesantren (Islamic Boarding Schools) leaders (ulema) to create a document that included a set of guidelines for Islamic environmental jurisprudence (fiqh al-biah). The document was then used as an instrument to approach various levels of leadership, from government decision makers, to mosque imams, ustadz (religious teachers), and ulema, as well as informal leaders in various communities. We discovered that, in Indonesia, there is no resistance in trying to mobilize Muslims to participate in natural and environmental conservation, and that this positive acceptarnce is largely due to the ulema’ understanding in the severity of environmental damage.

“The Fatwa in Boosting Environmental Conservation in Indonesia”

The concern on the importance of Muslim involved in the movement for the better environment in Indonesia has existed since 1980s, since the involvement of the Islamic boarding school leaders in triggering their community and the involvement of NGOs in empowering the community, particularly in the resurrection of environmental restoration, especially for the agriculture. In 2011, MUI established the Institute for Environmental and Natural Resources (PLHSDA) in the Clerical Conference, after the Bogor Declaration on Muslim Action on Climate Change 2010. The role of this unit within the MUI is very important because the MUI has a liaison tackling to various important issues in the environment, to whom the Muslim, found an authoritative answer for the environmental challenges. So far, there have been seven MUI fatwa (edict) released by MUI related to the environment and the conservation movement. This paper will highlight environmental movements by the Muslim community in Indonesia, and describe how the implementation of the MUI fatwa can contribute to the massive increase in environmental challenge and increasing the involvement and understanding of  the Muslim communities in their participation to tackle the biodiversity conservation as well as climate change.